This article first appeared on my personal site icoldwell.com in 2001-2002.

In the last part of 1929 Andres Segovia performed in Tokyo (October) and Osaka (November). It was the first time for a well-known Western guitarist to perform a concert in Japan. There were other Westerners who had performed, but none had any international stature – certainly none to compare to Segovia at the time. The records I have of his performances in Tokyo were at the Imperial Theatre on the following dates: Saturday, October 26, 27 and 28. The only certain date I have for the Osaka performances comes from a program published by Gendai Guitar, A Pictorial History of the Guitar in Japan. It is dated November 2, 1929 at the Asahi Kaikan. 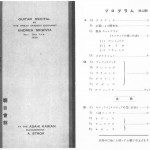 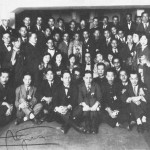 photo taken on November 20, 1929 at the Osaka-do Building Hotel

I had planned to make translations of all the reference material I have regarding these performances, but I have not had time so I am making these copies available. These are images taken from photocopies of the original journals.

Teigeki (Journal of the Imperial Theatre), Number 83, October 1929
program of his performances, etc. 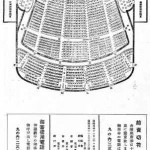 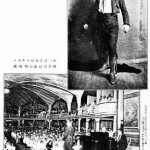 8/5/2018: I was recently able to acquire scans of some issues of Morishige Takei’s journal “Mandolin and Guitar Research” from 1929-30 which has many articles about Segovia as well as some interviews. There are complete listings of his programs and very detailed reviews of his performances.

1/4/2020: Many articles and advertisements for Segovia’s concerts appeared in the English language Japan Times newspaper around the time of his performances.