On November 6th, 1856, less than a month after the death of J. K. Mertz on October 14th, his manuscripts and instruments were put up for sale.

I find it interesting that Josefine Mertz continued to advertise the instruments up to a year later, but did not mention the manuscripts beyond the first advertisement. Possibly there were other advertisements that have not been found. Unfortunately it is not clear which manuscripts were offered at this time.

While quite a number of Mertz manuscripts are known in various libraries and collections, there are still those whose current whereabouts are unknown. 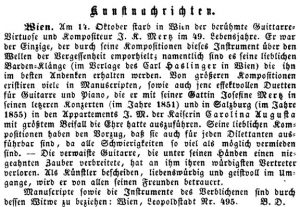 Vienna. On October 14th the famous Guitar virtuoso and composer J. K. Mertz died in Vienna in the 49th year of his life. He was the only one who, through his compositions, had raised this instrument above the waves of oblivion; In particular, it is his lovely Barden-Klänge (from the publishing house Carl Haslinger in Vienna) which will be best remembered. Many compositions are in manuscript, as well as those effective duets for guitar and piano, which he performed with his wife Josefine Mertz in his last concerts (in 1851) and in Salzburg (in 1855) in the Imperial apartments of the Empress Carolina Augusta with the greatest applause. His lovely compositions have the advantage that they can also be performed by any amateur, since all difficulties are avoided as much as possible. The orphaned guitar, which under his hands spread an unprecedented charm, has lost its most worthy representative. As an artist modest, amiable, and witty, he is mourned by all his friends.

Manuscripts as well as the instruments of the deceased can be obtained from his widow: Vienna, Leopoldstadt, No. 495. B. D.

The only other advertisements which have been found all appeared in Fremden-Blatt the following year in slightly different formats. 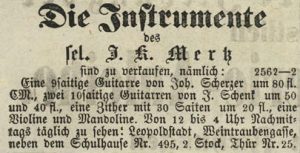 Great stuff! Particularly, but not exclusively, the instrument references.