Luigi Sagrini was a child prodigy on guitar who first performed at the age of eight years old in 1817. In Paris when he was sixteen years old he performed in concert with Liszt and published his first seven opus numbers for guitar. His opus 4 was dedicated to Luigi Legnani, and Legnani in turn dedicated his opus 9 and opus 32 to Sagrini. After arriving in London in 1829 he continued publishing and performing for many years. Due to declining health he stopped performing and devoted his time to teaching and publishing songs with guitar accompaniment. It was perhaps due to his inability to continue performing and publishing that he was forgotten in the 20th century.

A guitar owned by Bernard Lewis contains a handwritten label which reads “Guitare à la Sagrini en 1825.” The guitar’s possible provenance and connections to Sagrini are detailed with some documentary evidence. Sagrini’s concert and publishing activities from 1817 until his death in 1874 are documented in detail with original newspaper articles and concert programs. A total of 105 of his known concerts in France, Italy, Switzerland, Belgium and England are covered. This includes only the documented concerts and it is likely he performed many more that are yet to be discovered.

Sagrini’s concert career unfortunately began to wind down in the late 1830s with his last known concert occurring in 1840. Health problems seem to have been the reason for the decline in concert activity. Teaching and publishing songs with guitar accompaniment became his primary means of income. In the 1850s he became financially independent and was able to retire from the music profession. When his supporter died in 1872 and their will was contested, much interesting information was published in the newspapers regarding Sagrini and the financial support he received. All details of the multi-year lawsuit are included.

A 30 page music catalog lists all his known works for solo guitar, duo guitar, guitar/piano, and songs accompanied by guitar. All title pages for located copies are included.

The Sagrini extended family has been documented from Luigi’s grandparents and includes all of his brothers and their families. Luigi’s brothers Italo Augusto Sagrini and Publio Scipion Sagrini appeared in London concerts as child prodigies in the 1830s, but an additional brother has been discovered by the name of Charles Parménide Sagrini. It was this last discovery which helped piece together the activities of Luigi’s father and his brothers in later years.

The complete contents of the biography are listed on the sales page for both the PRINT and DIGITAL editions.

The Music of Luigi Sagrini

The music volume begins with a shortened biography that concentrates on the dates of his editions. The complete music catalog from the biography is included. 24 editions published by Sagrini from 1825 to 1850 are included. The earliest edition is his opus 2 published by J. Meissonnier. All of his located editions published in Paris are included which is followed by editions he published with Schott. Generally he applied opus numbers chronologically and the last known opus number is 27, which is included in the volume.

Through the 1830s he published both with and without opus numbers. In the late 1830s he stopped using opus numbers and his publications became simpler. As his concert career began winding down he started publishing more songs with guitar accompaniment. His last known concert was in 1840. He published well over 50 songs and those were considered too numerous to include in this volume.

The music volume includes his 1850 Method and accompanying Preludes, Exercises & Airs. He published methods earlier in his career but those have not been located.

The complete contents of the music volume are listed on the sales page for both the PRINT and DIGITAL editions.

Among Luigi Legnani’s list of compositions there are well-known gaps in the opus numbering. Opus 9 was one of these missing numbers. The extensive research carried out for the Sagrini biography and music volume resulted in the discovery of this missing opus 9. The title page of opus 9 mentions Sagrini performing this work in Paris concerts. Unfortunately it is not known which concerts on which dates. It most likely happened when Sagrini was in Paris 1824-1826. After opus 9 was discovered, another Legnani work dedicated to Sagrini was found. This was the Pacini edition of Legnani’s opus 32. Sagrini also dedicated his opus 4 to Legnani. Definitely there was a connection between these two virtuosos, but the actual details are not known.

The complete opus 9 in facsimile along with an article detailing its discovery is available in il Fronimo, XLIX/194, April 2021 and Gendai Guitar, No. 696, September 2021. The bound volume the original edition is in can be purchased from DGA Editions as a digital edition. This is the only known existing copy of opus 9.

Latest status. Updates on the progress will be posted here regularly.

Have considered the works with Terz-guitar?

All the found works by Sagrini are included in the music volume except the Schonenberger combined edition of op. 11 and 12, since the music is identical to the Schott editions. Sagrini only published one edition that called for terz guitar. My list of known works below is out of date but if you know of other works I would be very interested in them. There are many gaps in Sagrini’s publishing I have not been able to fill.
Luigi Sagrini works 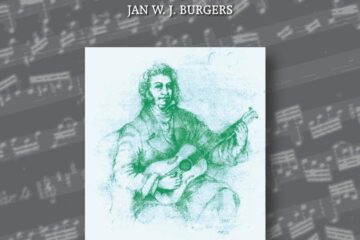 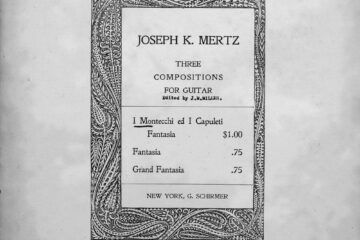