This article was first published on Matanya Ophee’s Guitar and Lute Issues site in 1997 and later on my personal site icoldwell.com. 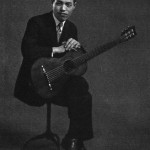 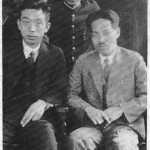 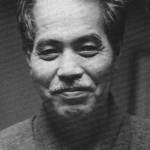 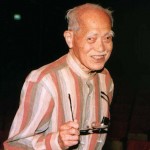 Jiro Nakano was probably the most active guitarist / mandolinist / researcher outside of Tokyo. Considering that he is still alive at the age of 95 makes him the oldest of all the active guitarists in Japan. Nakano was born in Nagoya on April 10, 1902 and has lived there ever since. At about age 15 or 16 he entered the Nagoya Vocational high school as an assistant in the architecture department. When he received his first half-month’s pay of 20 yen he spent 19 yen of it on a Suzuki mandolin. However, it was an impulse purchase since he had neither heard the mandolin before nor knew how to play it. After he bought a method by Munier he began to practice in earnest. Two months after studying with this method he played a Munier composition which quite surprised his seniors in the architectural section of the school. At this point he formed a mandolin club of eight members which performed in Nagoya and outlying areas.

During this time Nakano spent all of his monthly earnings on music and began ordering overseas for foreign editions. He first began collecting in 1921 and continued until 1985 when he gave his collection to Doshisha University in Kyoto. Even after this he has continued his collection and is still active today.

After playing the mandolin for a year he picked up the guitar. As with the mandolin he knew nothing about the guitar except that he had a desire to play it. From his own explanation he would play until his fingers began to hurt at which point he would then look through guitar-related catalogs.

Though the dates are unclear, sometime soon after the end of World War I Nakano and two of his friends, Akira Kawase and Hiroshi Kawai, bought guitars from Philip Bone in London. When they first wrote to Bone they received photos of of about 20 different guitars priced from 20 to 30 pounds. Even though Nakano did not have the money to buy any of these guitars he knew he had to find some way to pay for one. Kawase bought a ten-string Stauffer that had a dedication from Giulio Regondi to his doctor, Caisford . According to Bone, this guitar was bought after Caisford’s death by Madame Sidney Pratten for one of her students. Bone obtained the guitar after this student’s death. [This guitar was bought by Kogoro Mizobuchi after Kawase’s death. It is now in the collection of the luthier Masaji Nobe. Sometime during its time in Mizobuchi’s hands the floating bass strings were removed – including the extension on the head – to turn it into a six-string.] Kawai bought a Lacôte that was used by Felix Horetzky and Nakano chose a Panormo. Upon the guitars’ arrival in Japan the three took turns playing them. Nakano knew that he would not be able to take his Panormo home because he could not pay for it. However, owing to Kawai’s generosity (and his wealth) Nakano was able to keep the guitar. At the same time they bought the guitars they also purchased an album of guitar works that had once been in the possesion of Felix Horetzky. It is in three volumes and contains a total of 27 works. Unfortunately, it is inaccessible since it remains in either the collection of Kawai or Kawase – since both of them have passed away the collection is in the hands of the family.

Even though Nakano was self-taught on the guitar, by the time he was 24 (after 7 years of study) he had begun performing concerts. His first concert in July, 1926 consisted of a wide range of music:

As mentioned in “The Early Guitar in Japan,” Fuku’ichiro Ikegami was the first guitarist to hold a solo recital, but Nakano held his first recital only 3 months after Ikegami’s second recital in April 1926. Nakano also held his recital earlier than Okawara’s first one in July 1928.

In 1928 Nakano formed the Nagoya Mandolin Gakudan and at the first concert in October of the same year there were a total of 33 members performing under Nakano’s direction. The group continued to perform twice a year through the succeeding years. Based on Nakano’s conducting experiences with this and other groups he was chosen to lead the NHK Nagoya Broadcasting Orchestra in 1945.

Nakano first began to compose in 1931. Similar to his experiences with the mandolin and guitar he was also self-taught in composition. In addition to works for the mandolin and guitar he wrote songs, of which about 100 were children’s songs. Many of these children’s songs were written as part of his broadcasting work which started in 1936 at a local radio station, J.O.A.K..

Around this time he formed a five member mandolin group called “Club Domenica” whose repertory consisted of over 100 transcriptions by Nakano.

As a result of the positive reaction to the broadcasts at J.O.A.K. he founded the Nagoya Guitar and Mandolin Study Group in June 1936. At the end of that same year he began publication of a journal called “Guitar and Mandolin World.” This only ran for 18 issues at which time he stopped publication because he had started to contribute more regularly to magazines such as “Armonia,” “Gaku-yu,” and “The Study of the Mandolin and Guitar.” Gradually readers of these magazines began to realize the depth of his knowledge and his importance to the guitar in Japan. A list of Nakano’s compositions, a catalog of his music and books, and an autobiography appeared in a special honorary issue of “Fret” (Japan) magazine in 1962. The Japan Guitar Society, in the Journal of the Japan Guitar Society (Oct./1986 Vol.6), published a special section on Nakano when he gave his collection to Doshisha University.

One of Nakano’s achievements was winning a prize for his “30 Variations on a Theme of Paganini” [Op. 70 (1951)] in the 1954 International Guitar Concours sponsored by the Italian Guitar Society. Since this composition was published (Cinque Variazioni sur un Tema di Paganini Berben, 1956) in connection with the concours it was probably the first time for a Japanese guitar work to be published in Europe. Overall Nakano wrote considerably more compositions for the mandolin than the guitar. He wrote a total of about 38 works for guitar – this includes solos, duos and ensemble works.

From the very early issues of Gendai Guitar (which was started in 1967 by the luthier Masaru Kohno) Nakano was a frequent contributor. In 1970 Gendai Guitar put out a “Supplemental Issue No.2” in which Nakano contributed information on 19th century guitarists to a list of major guitarists. Beginning in January 1974 he had a 24 part consecutive series that was a list of all the guitar compositions from Whistling’s “Handbuch der Musikalischen Literatur.” Then from April 1977 he had a 31 part series comprising his autobiography. Along with these regular contributions he edited many volumes for Gendai Guitar of compositions by Sor, Carulli, and Coste which were taken from original 19th century prints in his own collection. The first editions he worked on were those of Sor (he edited 9 out of 10 solo volumes and 2 out of three duet volumes). These were published many years before those of Brian Jefferey. The three volumes of Coste were also published well before those of Chanterelle. He had personal standards which were never to change a note from the original to the urtext edition – all stemming and notes (even possible printing mistakes in the original) stayed exactly the same.

For the majority of guitarists who do not read Japanese it is difficult to get a good comprehension of exactly how much information Nakano collected about the guitar. Often his efforts were limited to magazine articles or private publications of a mandolin dictionary (comparable to Bone’s “The Guitar and Mandolin”), a hand-mimeographed catalog of his collection and numerous other self-published books. All of the information Nakano used came from his own collection. As mentioned above he began collecting almost from the moment he picked up the guitar. Nakano still has the original letters from the 1930’s from used music shops in Europe where he obtained most of his 19th century prints. Because of his long involvement with the guitar he was able to see how much more difficult it was becoming to find original 19th century music. He was also very aware what happens when a guitarist dies and his collection is either locked away by relatives, sold off in parts or left in inaccessible limbo by a library that is unaware of its importance. In Japan there are only two guitar collections currently housed in a library – Nakano’s and Takei’s. All of the other collections contain a great deal of historically valuable material, but are inaccessible because they are still held by relatives who are unaware of the collections’ importance. Because of this knowledge – or worry – Nakano decided to give his collection to Doshisha University in Kyoto. At the age of 83, when he knew he still had time to deal with his collection, he gave a total of 12,000 items to the university. By 1992 the collection had been completely catalogued and is publicly accessible. Fortunately, Nakano has had the chance to see his collection properly dealt with and used as a valuable resource not only for its tremendous amount of original 19th century European prints, but also for information on the history of the guitar in Japan (in addition to music, it contains a large amount of magazines and books – including the complete issues of “Armonia” [pre- and post-war], and the “Mandolin and Guitar” journals published by Takei) .

Nakano, at 95 years of age, is still active with Nagoya area mandolin societies and occasionally Gendai Guitar. Last year he conducted a mandolin orchestra for performances that were released on CD (“Romantic Mandolin” 1996, Voicelle VXD-96600). Currently he is rehearsing the orchestra for another CD release sometime this year.

i AM 77 AND PLAY MANDOLIN IN SACRAMENTO CALIFORNIA i AM INRIQUED BY THE COLLECTION OF MUSIC hOW CAN I ACQUIRE MUSIC FROM YOUR COLLECTION.. TONY DAMIANI

Unfortunately the Nakano collection is very difficult to access now that the university library will not make any photocopies. Nakano collected from many sources and had many photocopies from other libraries and individuals. I do have the Mandolin Collection catalog and can look up any composer you are interested in but you would have to ask Doshisha library directly for additional information.

Good morning.
I would like to know if it is possible to have a list of all the Giuseppe Manante’s mandolin compositions that M ° Nakano has collected during his life.
I thank you for all the informations you will can provide me
Yours sincerely
Alberto Mammarella

Thank you very much!
Do you know the title of Nakano’s printed catalog of mandolin works where there the 3 page of Giuseppe Manante’s mandolin compositions? 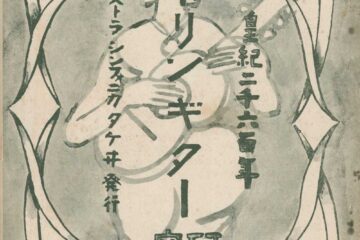 The Study of Mandolin and Guitar 「マンドリンとギター研究」 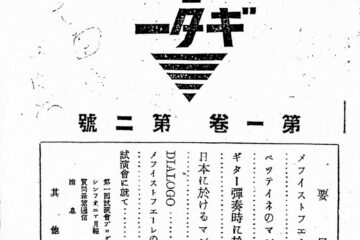 The Japanese journal “Mandolin and Guitar” 「マンドリンとギター」was published by Morishige Takei from April 1916 until August 1923. The series was interrupted by the Great Kanto Earthquake in September 1923. Takei restarted the journal under a Read more…