The Moscow Weiss Lute Manuscript: Inventory and Notes on the pieces, Part I

Italic titles are original, roman titles, etc., are editorial. Material cropped by the binder is in square brackets. The contents of the manuscript are listed here in the order in which they appear in the manuscript; the piece numbers are those in the edition.

The various editorial ascriptions to Weiss as composer are given in the styles described here which indicate varying degrees of confidence in his authorship. Absence of an ascription implies neutrality.

Written on a label on upper front cover, in a more recent hand [than the MS itself]:

(Weiss. A collection of pieces and sonetas[2]This is, obviously, a misspelling by the Glinka Museum librarian who catalogued this item. for lute.) 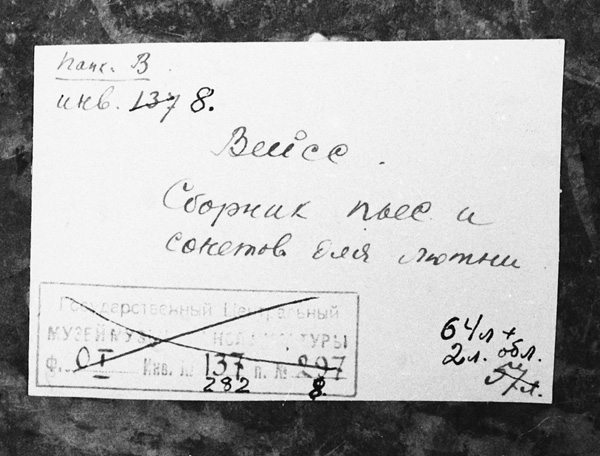 Vertically on right margin a line of cyrillic letters, the meaning or significance of which is not known. 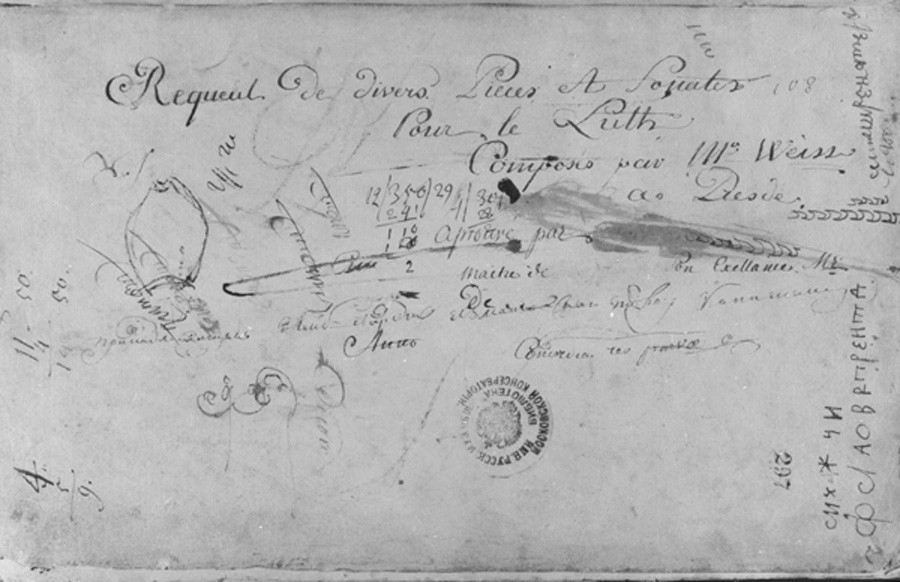 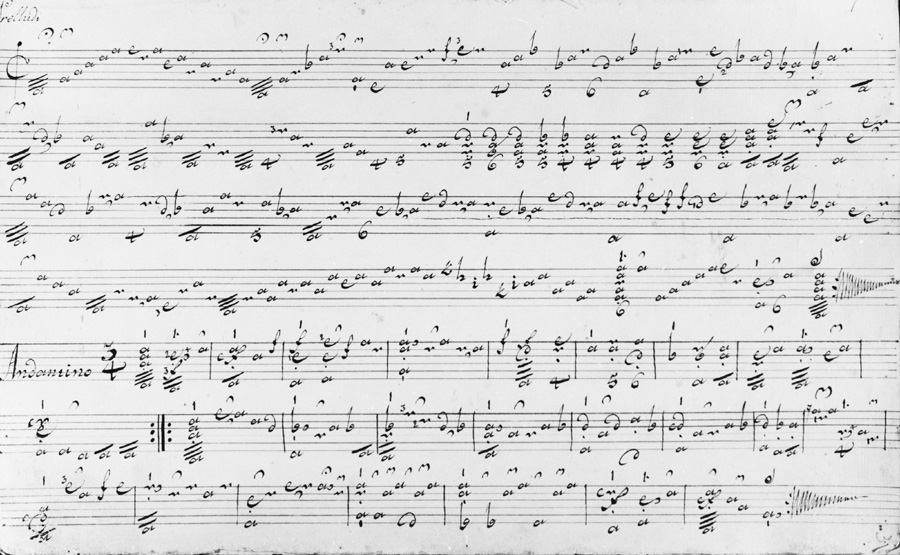 The augmented-2nd intervals (c#´-bb´) found twice in the piece are not present in the other sources, both of which have b naturals here. (See below, note to No. 3)

The Dresden sonata in which a slightly simpler version (presumably earlier) of this sarabande appears formerly bore a note in red pencil, now completely invisible:

(It was this partita that I learned first with Mr Weiss).

At first sight apparently in typical Weiss style; there are, however, some odd features: the rhythmic incipitis found only in this MS (cf. 32 and 34, below); the crude formal construction is not typical of Weiss. Probably by a ‘Weissiste’ imitating his style. It has Weiss’s use of sequence as a structural device, and ‘recapitulates’ the opening in his way; but it also makes prominent use of the interval of the augmented 2nd, said to be a typical feature of Ukrainian folk music.[7]See Waldmann 1963, col. 1132 and ex. 7, facing cols 1135-6.

The barring of the original is retained: changes of time-signature in meas. 14 and 15 are editorial.

Stylistically similar to 3, above, with similar use of the augmented 2nd.

More in the style of Weiss than 3 and 4, but somewhat lacking vigor, and lame in its use of sequence, especially around measures 45-50; contains a ‘Weissian’ disguised ’recapitulation’ at measure 51.

More typical of Weiss’s style than 3 and 4.

As 6, but with ‘Ukrainian’ augmented 2nds.

Most untypical of Weiss, especially formally: unusually symmetrical (8 + 8 meas.) and short. Its harmonic structure is bizarre: it is altogether exceptional for a trio in a minor-key minuet’s relative major to end in the tonic minor.

The only point of interest is the thematic relation of the opening motif to the opening of 8. 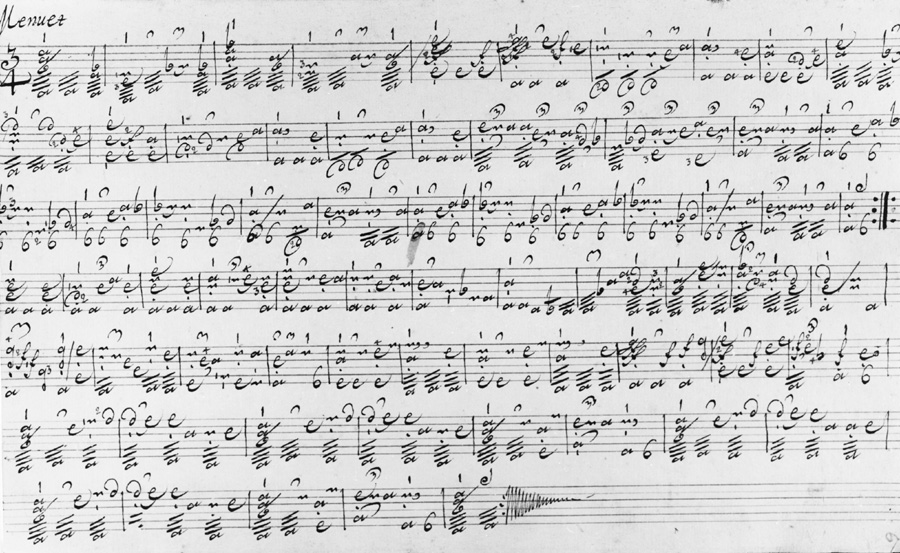 Menuet [Not by Weiss?]

Apparently added later to the MS. Quite definitely in a later style than that of Weiss; more like that of the young Haydn, for example. 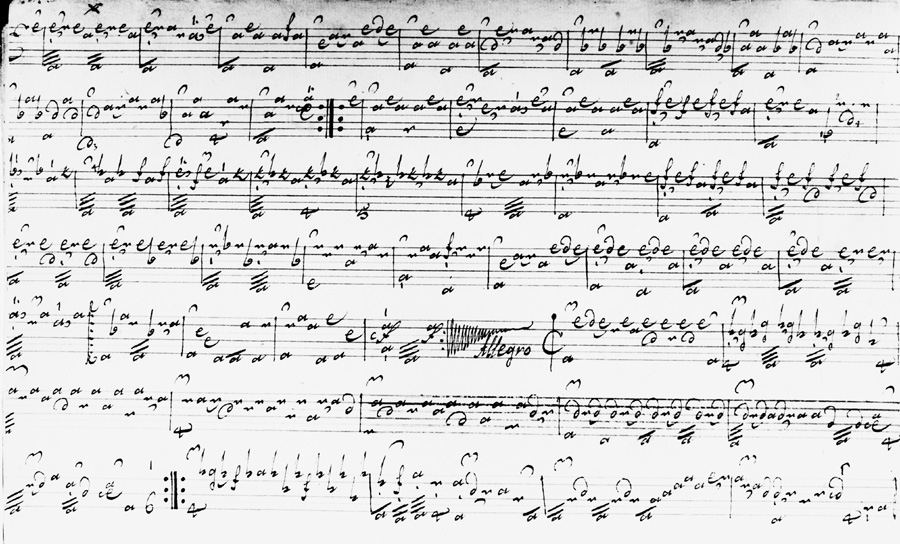 In a simpler harmonic style than Weiss frequently adopted for his bourrées, this is among the most wide-spread of his pieces. The version in this MS is a unique variant; the first of the two in London (Weiss SWL 3*, London, f. 39v) presents a different set of varied repeats.

Somewhat small in scale for an abstract allegro movement by Weiss. Also contains a prominent ‘Ukrainian’ augmented 2nd (measure 5). Probably not by Weiss.

This and the following polonoise (13, q.v.) are attractive examples of the early ‘German’ type of the dance showing no suggestion of Weiss’s compositional style.

The opening rhythm of this piece is cited in , example 3b, p. 28, as a characteristic feature of the early ‘German’ form of the polonoise, and is there compared with an example from Marpurg 1759, p. 100.

Although not marked as such, the first movements of each of the ‘partittas’ ascribed to Weiss in this MS are clearly allemandes, the dance-form Weiss most frequently used in this context (following an optional prelude, but occasionally replaced by an overture). The substitution of tempo-indications for dance-form titles (cf 2, above, and 21, 34, 41 and 44, below) probably reflects the lateness of the source.

Go to next Inventory document.

Regarding the 1998 Cuernavaca Classical Guitar Festival