The Moscow Weiss Lute Manuscript: Inventory and Notes on the pieces Part III

There is a written-out cadenza (meas. 70-74) which virtually excludes the possibility of a repeat of the second half of the piece. 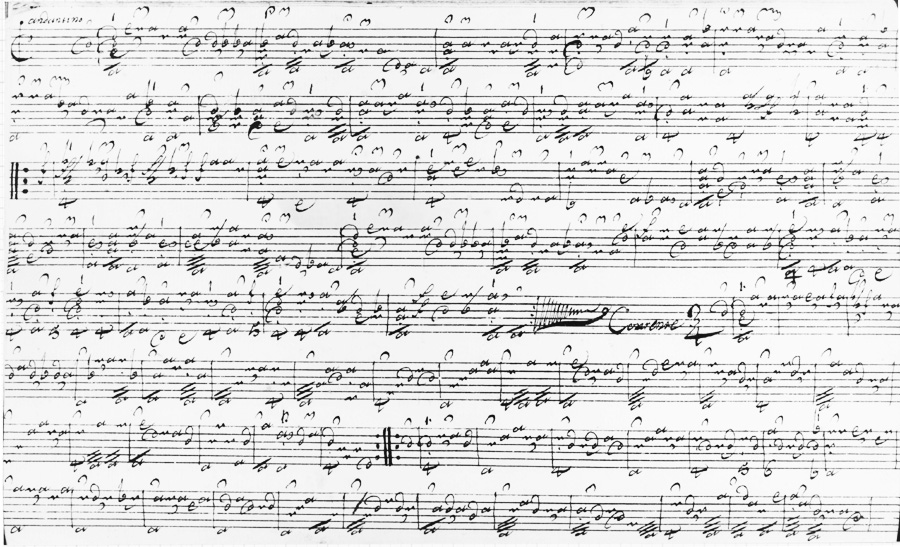 This is the first movement of a ‘partitta’ in F (note the ‘finis’ at the end of 38, below). Formally it suggests the work of a ‘Weissiste’ follower (or pupil?) of the Dresden lutenist, but certain stylistic features, notably the ‘rhythmic incipit’ (see 3 , q.v., and 32 , above), the repeated harmonic progressions, and the character of the cadence formulae, are quite unlike those of any surviving music that can be unequivocally ascribed to Weiss.

A typical early ‘German’ polonoise, cited as such in Wilkowska-Chominska 1963, example 3c, p. 28. 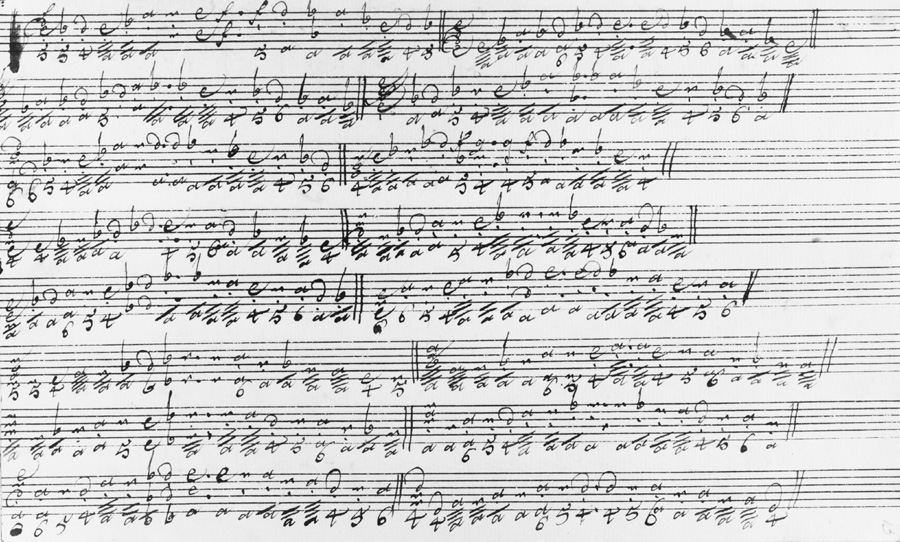 This set of scales written out in all the keys is unique in lute tablature, and would be a rarity in any musical source of the period. All the minor scales use the ‘melodic’ form (in which the augmented-2nd interval, otherwise unusually prominent in the MS, is avoided). The order of keys follows the ‘circle of fifths’ progression from g/Bb to d/F, and the tuning of the basses needs to be adjusted to this. That the intabulator recognises the transition from scales 11/12 (ab /Cb) to 13/14 (c# /E) as a point of enharmonic discontinuity (as transcribed here) is shown by the radical change in tuning of the bass strings:

This confirms that by this time in the lute’s history, the relationship between tablature and staff notation was fully established, and that tablature letters had an absolute meaning in terms of pitch. On the other hand, it is the case that the keys are not named in this source.[3]J.C. Beyer’s Herrn Professor Gellerts Oden, Lieder und Fabeln (Leipzig: Breitkopf, 1761) clearly assigns absolute pitches to the lute’s strings, and gives a table for all the common tunings used … Continue reading At an earlier period, the lute’s interval tuning bore a much more equivocal relation to absolute pitch, and to the names of the notes on other instruments or voices. 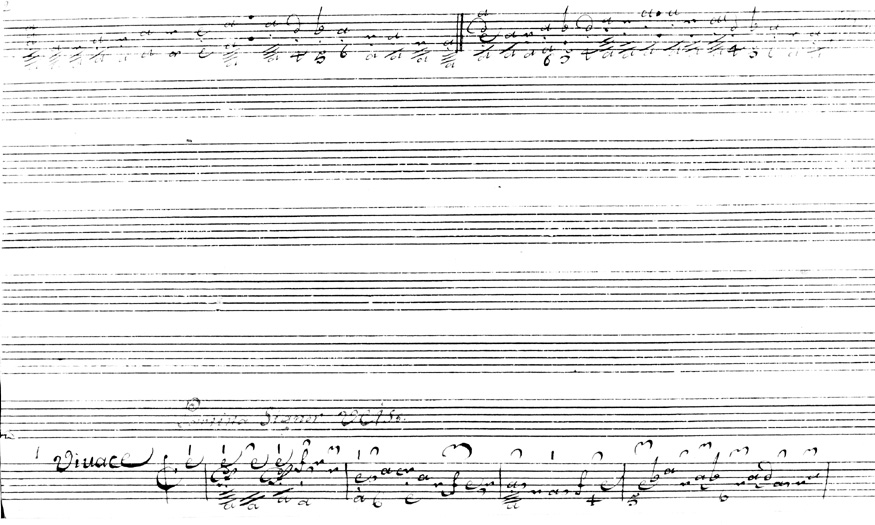 The movements of this partita (41-46) are numbered 1-6 in the manuscript, presumably because of the interpolation of two pieces (39 and 40), which are in another key and tuning and are possibly not by Weiss.

The allemande is marked ‘Vivace’, which is perhaps reflected in the texture, somewhat simpler than normal for Weiss’s allemandes, and may indicate a faster tempo than usual.

A fine example of Weiss’s mature style (cf. 20 and 28, above). The extraordinary modulations (especially in measures 74-93) are, if anything, more extreme than usual in his large-scale courantes; in this, they present some ambiguities and difficulties in transcription. As Weiss himself put it, in a comment written in an autograph album in 1741, next to an example in lute tablature containing similarly extreme modulations: ’Chi sa, … L’intendera’ (’He who knows … will understand’). This aphorism combines a pun on Weiss’s own name (Ger. weiss = ‘know’) with a reference to the mysterious enharmonic modulations.[4]Wolff 1973, p. 221.

In a running allegro-like style more akin to Weiss’s finale movements than his normal preludes, which normally incorporate some sections of modulating broken-chord figuration. An augmented 2nd appears at a conspicuously-exposed point (measure 5), which together with its unusual style perhaps suggests that this is another product of the composer of 3-6, 11, 32 and 34-38.

Although the ‘Ukrainian’ augmented 2nd is again given much prominence in this piece, which has the character of ‘imitation’ Weiss, it is not present where expected in measure 6. (The MS has a´ natural rather than the expected a´ flat. However, it should be noted that the scribe had second thoughts at this point: there is a cancelled f present on beat 2 at precisely the point where the a´ in question is placed.)

Full of Weiss’s wit, ingenuity and rhythmic felicity, this could hardly present a greater contrast with the simple-minded dances by the ‘Weiss imitator’ (cf. 8 and 36 , above).

The order of the Presto (45) and Menuet (46) should probably be reversed in performance, as was Weiss’s invariable practice. In Dresden, for example, the final movement of a sonata is nearly always written on two facing pages to avoid page-turns, with the preceding menuet written on the verso of the second page. In most cases, there is a note indicating that the menuet is to be played as the penultimate movement.

(see note to 45, above) There is a ‘Ukrainian’ augmented 2nd present in measure 51. It may have been composed thus by Weiss or be a result of the copyist’s habit, but there is no way to check, since this movement, like the rest of the partita, is unique to this MS.

The title ‘Alternatim’ implies that this is intended as a ‘trio’ to the previous menuet (46), or forms an optional final movement of the partita. However, although in principle it forms a suitable part of this group of pieces in D minor, there is a practical reason why not: the basses need to be re-tuned as if for D major. In Warsaw 2005 it is one of two D minor movements in a large-scale D major sonata. The Moscow scribe seems to have become confused by this unusual arrangement, however, or has made an unsuccessful attempt to ‘correct’ the tablature for a D-minor tuning.

There is inconsistent use of the augmented 2nd interval: measure 5 gives c# ´- b n ´; measure 45 gives c#´- bb´ for the same music. The title ‘Scherzo’ is entirely editorial. This and 30, above, have some affinity with early works by W.F. Bach from the period when he was acquainted with Weiss and Kropfgans while employed as organist at the Sophienkirche in Dresden (1733-46).[5]A Scherzo for keyboard in a style not dissimilar to 47 was published in two variant versions in the Bach Gesellschaftedition (vol xlii, pp. 220 and 281, respectively) as a work by J.S. Bach, BWV844 … Continue reading)

The Moscow scribe has substituted augmented 2nds for the normal 2nd intervals in measures 7, 30 and 31 (the Dresden autograph gives g#´-f#´ in all three cases). [Pen drawings in a childish hand, including an illustration of Pythagorus’s theorem.] 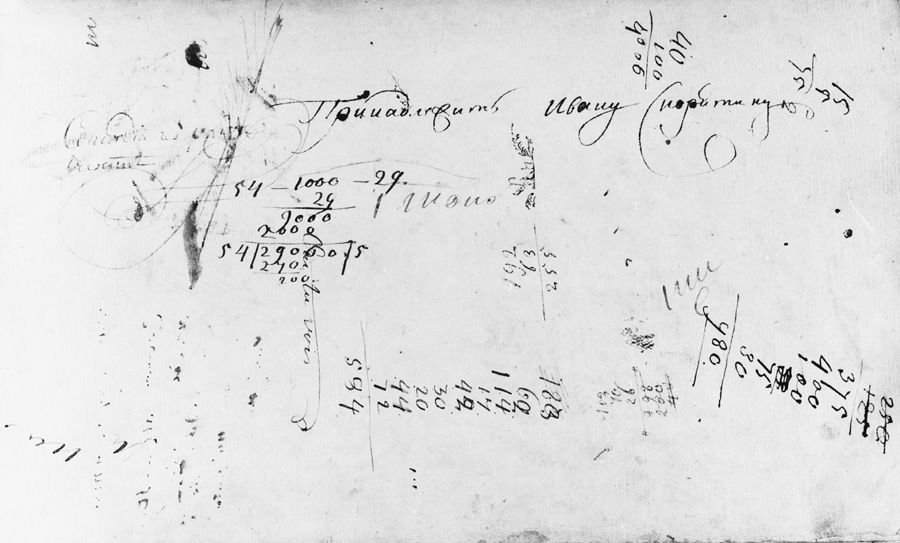 An ? architectural diagram; geometrical diagrams, including an illustration of Euclid’s first theorem; in Russian, hand D: a line of unconnected cyrillic letters and an unreadable inscription.[7]See: footnote 12.

Regarding the 1998 Cuernavaca Classical Guitar Festival